With the UK’s top quad bike stunt rider your audience are sure to be in awe at watching him fly over 30 feet high, and 70 feet from ramp to ramp whilst performing breathtaking aerial 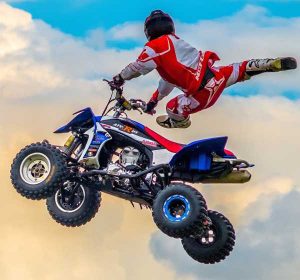 tricks. You will see quad freestyle, catching items of memorabilia in mid air and then awarding them to spectators, as well as the ever popular street style tricks where the action is brought close to the crowd.

An informative and humorous commentary is done by Ex World Championship moto-cross rider Jason Smyth via a microphone in his helmet, as he does his stunts! He will interact with the audience’ even whilst flying 70 feet through the air, to really get them involved in the show.

However the entertainment doesn’t end there, they also have a display unit where the public are encouraged to come and see the machines, chat with the team.

Inspired by a stunt team he saw over 15 years ago, Jason Smyth set up the Adrenaline Tour in 2003 and has been addicted to the buzz ever since. 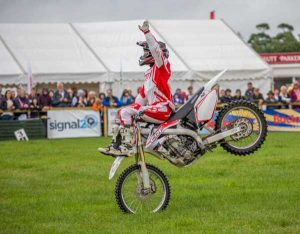 An adrenaline junkie since a young age, Jason has ridden and raced motorbikes since the age of 7. He has claimed titles of British School Boy Motocross Champion, British Support Class Champion, Luxembourg National Champion, competed in MX World Championship for 5 years with a best result of 17th. He also raced and finished top six in the British Supermoto championship and most recently he won three Down Hill Mountain bike races.